My first meeting with Anna – my mentor on the Konsten att delta (the Art of Participation) programme  – went well.  We chatted over tea and cake at the studio.  The programme matches native Swedish artists with non-native artists now living and working in Sweden, and is the initiative of the national artists’ association.  It has only recently been rolled out nationally after a few years of operating in a couple of counties and Stockholm.  Although Anna and I appear to have little in common in terms of our actual practices we got along well and spoke mainly about ways of being an artist and how best to make it sustainable – we both quickly established that neither of us earns our living directly from our studio practices! 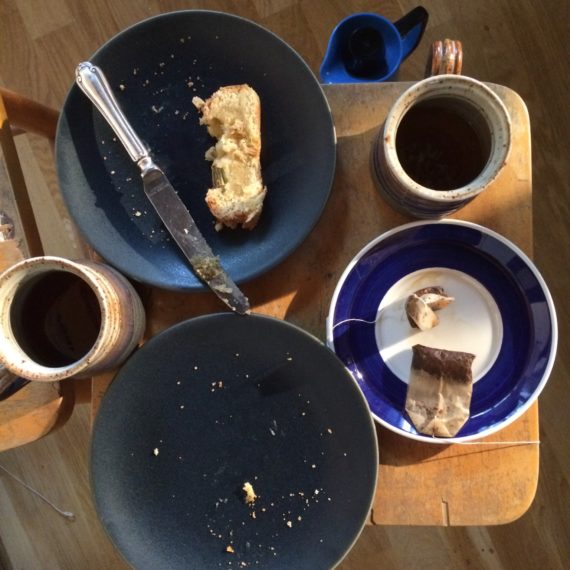 Anna was easy to speak with and it was good to hear a little about the art-scene in Uppsala – which galleries are taken seriously and (usually) lead to a show being reviewed, which associations it can be good to join, and the opportunities offered by both Uppsala city and Uppsala county – though as I live in Enköping I may not qualify for any ’city based’ schemes or projects.  It would be good for me to broaden my horizons and make connections with other artists, getting to know Anna makes this seem much more achievable – popping over to Uppsala for an opening or talk is hardly arduous but certainly nicer if you know someone to say hello to.  I hope that she too gets something out of the programme, I will think about what this could be.

Far from least it was good for me to discuss these things in Swedish.  It reminded me that it is time to focus on improving my art-Swedish.  With the evenings already becoming noticeably darker earlier I should dedicate one a week to actually, and actively, studying Swedish.  I have one book that I barely looked at while studying the language at adult education, it should help me both improve and advance my written and oral skills.  I should also pay closer attention to the Swedish press-releases that I receive from galleries.

Speaking of press-releases, I have just written one announcing Glitter Ball’s launch and inaugural show.  It is in English which makes sense as I am also sending it outside of Sweden.  In the future I would like to have a Swedish and an English version.  I want to write the Swedish one and have someone proofread it rather than have someone translate my English text.

Tomorrow I meet with the arts correspondent for the local paper in the morning to talk about Glitter Ball, and after lunch I have a meeting in Uppsala about the county’s mobile gallery that I have been invited to exhibit in. I really wish that there were more hours in the day and days in the week.