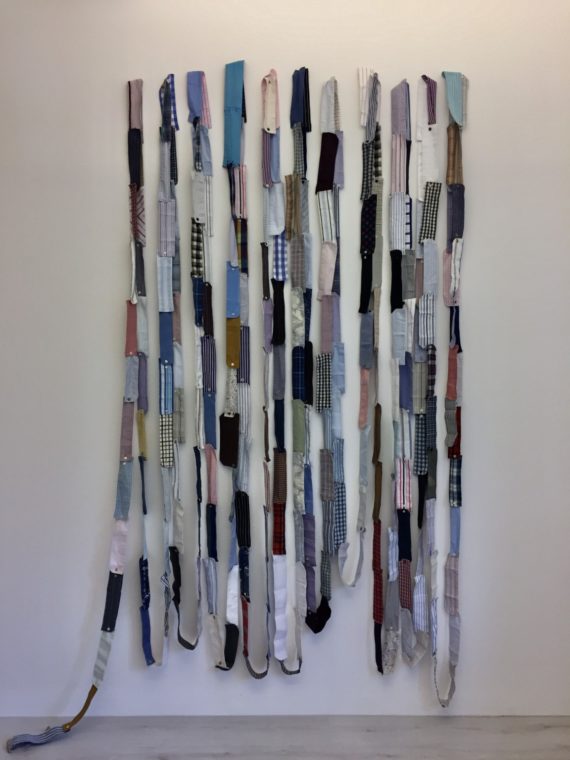 Suddenly one day last week a (’the’?) perfect title for the piece(s) that I am working on came to me – Rest.

I was not thinking about a title at the time, I was just quietly getting on with neatening collars for that part of the work.  At the moment I am considering that the work is one piece with two parts: one part collars, and one part cuffs – two companion pieces that together are a whole.

The cuff part is complete, all the cuffs have been neatened and buttoned together.  They are in the order that I unpacked them – only occasionally in pairs … I have not checked to see if they all have a partner.  French (double) cuffs and cuffs with press-studs rather than buttons are in a separate stack as they cannot be included in the length of buttoned cuffs.  I sat for while looking at the piece … I like it … I do not understand it.  it is a once playful and melancholic, it hints at bunting at the same as being rather sad.  The range of tones is quite extensive however seen en-masse they seem subdued.  Perhaps it is the piece’s stillness that lends it a somewhat mournful attitude.

Rest captures something of this quietness.  It suggests pause after action.  It also refers to something that remains – ”what about the rest of it?”.  Rest in Swedish means remains or scraps: matrest – food scraps, tygrest – fabric scraps.  That the word works in both languages makes it even more apt.

There are significantly more collars than there are cuffs.  I wonder why … perhaps some cuffs got lost in passing the material from one person to another (I do not remember ever asking Elena who she got them from), perhaps some cuffs got used along with the bodies of the shirts in the patchworks.  The pointed tips of each collar give that piece quite a different feeling – almost more mechanical, as though it were some kind of drive-chain – the angular tips having engaged with cogs or wheels and driving them on as part of a larger machine.

Buttons or collar stiffeners sometimes reveal the make of the shirt, most though are unbranded.  Nor is the fabric known, most feel to be cotton or a cotton blend.  Some immediately seem out of fashion, the proportions or design details suggesting a garment from the early 00s, the 90s or even the 80s.  Others are timeless – simple checks in beige, brown, and green that might equally be from the 50s as from last year.

As I have mentioned before I am very aware that the form the pieces have taken is informed(?) by the studio in which they were made.  I did not consciously decide not to unpack all the material when the parcels arrived at my studio in Enköping well before I had even thought of asking about studios at Hospitalet.  Could I have subconsciously known that the material needed another kind of space in which to shine?  I have plenty of other unused materials in Enköping but for some reason something made me take those packets of collars and cuffs to the new studio.  I do not need to know why or how.  Some things do not need to be, and cannot be, analysed they just are as they are.

I do not know why the work came to be, nor why its name came to be, but it has and it did, and for that I am very happy!