Exciting news – I will be taking over as Meetings Coordinator for Supermarket – Stockholm’s Independent Art Fair! Katarina is stepping down after seven very successful years of bringing together artists, curators, activists and producers. The meetings programme is a core component of the fair as it provides a structure for the exhibitors and ’professional network participants’ to discuss pertinent issues and ideas in smaller more focussed clusters away from the hustle and bustle of the exhibition halls. Over the years Katarina has built up a programme that has spawned a great many connections and collaborations between artist-run initiatives in Europe and around the world, as well as facilitating lively debate and the sharing of stories during the fair itself.

The postponement the fair scuppered Katarina’s plan to finish after the events in April which while disappointing for her is perfect for me. I am incredibly grateful that I am able to ’hop on a rolling train’ (as the Swedes say). Rather than starting from zero I inherit a good schedule of meetings, a host of meeting coordinators/leaders, and a list of exhibitors’ preferences. Unfortunately it is not yet possible to reschedule the fair as gatherings of more than fifty people are still prohibited in Sweden. The ambition is to hold the fair in late summer or early autumn, though this obviously depends on significant changes in the health authorities guidelines.

I am looking forward to being more actively engaged with the fair’s exhibitors and participants. I was very pleased to hear that Alice, Andreas and Pontus, the fair’s creative directors, all support me taking on the role – that means a huge amount to me. For the time being I will continue with the proofreading and language editing too, though it is perhaps time for me to keep my eyes open for another native English speaker to join the publication team.

Three years ago – I was working for the parks department at the time so it must be 2017 – three old sewing machines arrived at the studio. Two were (separate) flea-market finds, I think that they were £2.00 each. The third I got from a man at the recycling centre, I thought he was throw away just the carry-case, which I wanted for one of the other machines, but as soon as he handed it over I realised that there was a sewing machine still in the case. Don’t ask why I bought two identical machines – I reasoned that it would be good to have spare parts but honestly I think I just liked the symmetry! Yesterday I finally got around to testing all three – two needed new plugs fitting as their old Bakelite ones no longer fit electrical sockets (and no longer comply with health and safety regulations). The freebie and one of the flea-market machines work perfectly, they produce nice well tensioned stitches and hum along smoothly, even the lights work. The third produced a worrisome groaning noise staining to raise the needle that I had manually wound down in to the fabric. I decided not to test it further for fear of something snapping, igniting, or exploding. That machine though has now provided the other bought one with the removable arm extension that it was missing.

In the internal pocket of the freebie machine’s carry-case I found the original instruction manual. I eagerly flipped through it hoping to establish what a mysterious third button was for. The manual however proved to be in Finnish. So I have now added the manual for the Husqvarna Automatic CL21 (or CL21A) to my flea-market shopping list, along with the range of feet. (I realise now that I know they are called ’pressarfötter’ in Swedish but I am not sure what they are called in English.)

The machines are wonderful, with a very ’vintage’ shade of green on their sturdy metal bodies. The controls feel solid and are easy to use. Stitch options are straight or zig-zag with the facility to control stitch length and breadth (for the zig-zag). There is also the option to zig-zag to the left or right of the needle’s centre position – which I assume is for making button holes. Their simplicity and durability really appeals to me. 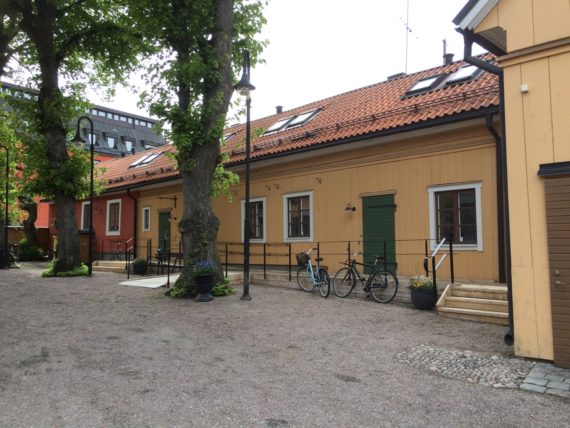 Thursday late afternoon I was sitting with some other artists in the studio/workshop in the new (artists’) club-house in Uppsala having just helped with the move from the old club-house when my telephone rang. It is unusual that I had the volume switched on and at first I did not think that it was my phone – a process of elimination performed by the others quickly identified that it was my phone, and the screen told me that a London number was calling. It was Michael Petry, of MOCA London, he had an almost last minute problem to resolve – one of the artists booked for MOCA’s first online private view had been forced to drop out – did I have a short film or performance that I could present on Saturday afternoon? It just so happens that I do as I recently made my first digital film piece to enter this year’s online Enköping Open. So this afternoon at 5pm UK time, or 18:00 Swedish time, I will one of six international artists presenting work to an audience from the UK, Europe and America. I am excited to take part and delighted that Michael and Roberto thought of me. We tested the technology yesterday afternoon and the piece looks good. I had to adjust the sound levels as neither Michael nor Roberto could hear the ambient sound track. Now that is fixed and almost everything is in place for the presentation. Having seen the Zoom view of my apartment I have decided to turn my desk ninety-degrees anticlockwise to so the background is bookshelves rather than the unattractive and dated beige wallpaper that I saw behind me yesterday – I have yet to decorate the living room!