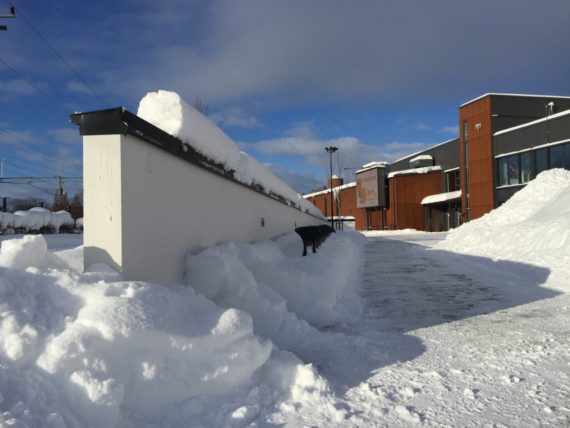 Almost exactly as I made that last post I got a message letting me know that there are two studios still available at the Hospital and that I was very welcome to come look at them! I read the mail twice just to make sure that I understood it correctly. Yes, two studios: one larger and one smaller.

Over the weekend I spoke with studio coordinator, she was really pleased to have received my application and thinks that I would be a good addition to the artists’ group – I was surprised and flattered to hear that (to be honest I find it difficult to accept compliments so probably humbled something dumb). We arranged that I would go and see the studios on my way back from a site visit in Tierp on Thursday.

So yesterday evening, a little later than expected due to an unexpected snow storm as I was driving down the E4, I met Anna Karin and she showed me the studios. The smaller one is hilariously small – no more than a cupboard with a window and radiator really. The proportions make the room rather tricky: it’s a door’s width and long with a good size window on the lefthand long wall. Much as it would amuse me to have such a room it would of course be completely useless as a studio. The larger room however … is rather attractive. It reminded me of the residence studio that I had a WIP (Stockholm, 2009) which in one way or another played a part in my moving to Sweden. The proportions of the large room and the studio at WIP are similar – another long room with a window at the end. The Hospital building is considerably older, the window more modest, the ceiling higher, and the surroundings completely different but none of that diminished my sense of familiarity.

The studios (as a whole) operate similarly to WIP: separate studios on long corridors with shared kitchens and toilets for which there is a cleaning rota. The studios are sublet from the city council which is also like WIP. One obvious difference is that some rooms are let by writers and musicians (the majority though are artist’s studios). Anna Karin introduced me to some of the artists who were there and had their doors open. It felt good to be there and to recognise kindred spirits. Not that I am unfamiliar with the building, one of the committees that I sit on has its office at the Hospital and if it weren’t for covid we would be having our meetings there, I have also been on several professional development courses in the studios’ project room.

I guess what really appeals to me is that everything that I would like to achieve with the studio in Enköping is already up and running. Taking a studio there would (to a great extent) allow me to get on with my own practice without having to worry about all the challenges and uncertainties that persist at the Enköping studio. The Hospital offers a good ground from which I could actually grow, and I think that being together with other exhibiting contemporary artists would be very beneficial. I also think that I could make useful contributions to the collective projects and events that they arrange. It would be wonderful to be swimming with the current! Doing what I do in Enköping feels more like being a salmon – going against the stream and exhausting oneself in the process.

Over the weekend I need to take a good look at the finances, I know that I have savings that would cover the studio rent if necessary but I would prefer not use them for that. On the other hand it would not be the worst use of them. Today I took a page in my sketch book and headed up two columns, one for pros and one for cons of taking the studio at the Hospital. The pros far exceeded the cons, the only serious cons being the additional cost and the commuting. The pros included being in a professional environment, being part of the city’s art-scene, raising my visibility, collaborative projects, renting from a council that meaningfully supports the arts, the likelihood of studio visits from other arts professionals, wi-fi, open studio events, and not least a studio with proper electricity, toilets with proper lighting, and a proper kitchen.

On Monday I have to say if I want to take the studio or not. I think that I already know what I will say but I will talk with friends over the weekend, and do some sums.